Star Date 20.05.2019 – We’ve encountered a new and strange entity in the depths of space. A creature so alien to us I don’t think we’ll be able to open constructive dialogue. It calls itself….’The Know it all’.

Hello Blogatrons! Today I’m going to be musing on the finer points of Fact vs Fun. Let’s face it we all know the guy in the picture above. The guy who tells you ‘Actually you wouldn’t hear that ship blow up as there is no noise in space.’ I know you just did it in what you think his voice sounds like right? right?… yea, thought so.

In a world where we yearn for realistic characters, believable plots and relatable adventures why do we miss the most basic blunders?

Is it because we choose to? Picking fun over fact maybe?

If I ask you, why in Star Trek, the Captain can click his Com badge and speak freely. And the bloody thing knows who he was directing it to, without him saying their name half the time. – ‘Can you get that engine running Scotty?’

Would it ruin the show for you? No, I don’t think it would.

In a world of make believe, where do you draw the line it what you’re willing to accept? I mean, its all fake, right? so why does that God dam badge annoy me so much?

I’m not annoyed by the wealth of Alien races who arrive throughout countless tv shows and communicate in English with us as their chosen method. Even know the most commonly spoken tongue on Earth is Mandarin. (well maybe I am a little hung up on it)  But that badge, it’s like Siri on crack. 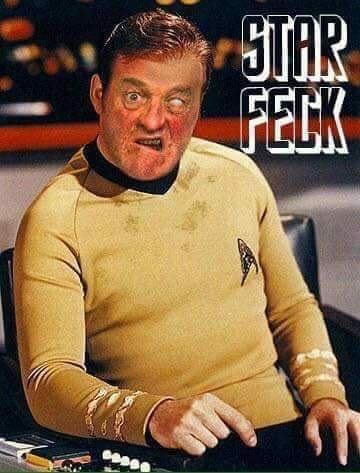 No wait I take it back! I love me some ‘bold exploring’. And I think that is where the problem lies.

In 1518 Europeans bought the smallpox epidemic to Native Americans, nearly wiping them out. And that was the same species! What would us dirty humans do to E.T? But you don’t see Han Solo wearing a Hazmat suit around Chewie!

A sense of realism is important in story telling but don’t forget your telling a story. Your taking your reader on a journey, of excitement and intrigue. Some times you have to look at the tightrope your traversing and not stray too much one side or the other. You’re a story teller, don’t confuse Fiction with Fact too much.

Again if anyone can shed light on that badge thing let me know.